PULLY, Switzerland — The World Baseball Softball Confederation (WBSC) today unveiled the groups and dates for the XVII WBSC Women’s Softball World Cup Group Stage, to be played from 11-26 July, 2023 in Ireland, Italy and Spain. The tournament will be the first event to be played under the new Two-Stage format.

“The XVII Women’s Softball World Cup represents the return of the premier international women’s softball event to European soil, a demonstration of the development of softball on the continent with three countries passionate about sport – Ireland, Italy and Spain – hosting this major softball event for the first time in their history,” said WBSC President Riccardo Fraccari. “This breakthrough event will be a milestone for our organisation, with the debut of the Two-Stage tournaments, providing more opportunities for teams to participate and for countries to host events like these.”

To open the XVII Women’s Softball World Cup, an expanded number of 18 teams representing the five Olympic continents have been drawn into three groups of six teams, each of them to be played in a different location.

The tournament will start with Group A in Dublin, Ireland, from 11-15 July; followed by Group B in Valencia, Spain, from 18-22 July; and Group C in Castions di Strada & Buttrio, Italy, from 22-26 July. The groups are as follows: 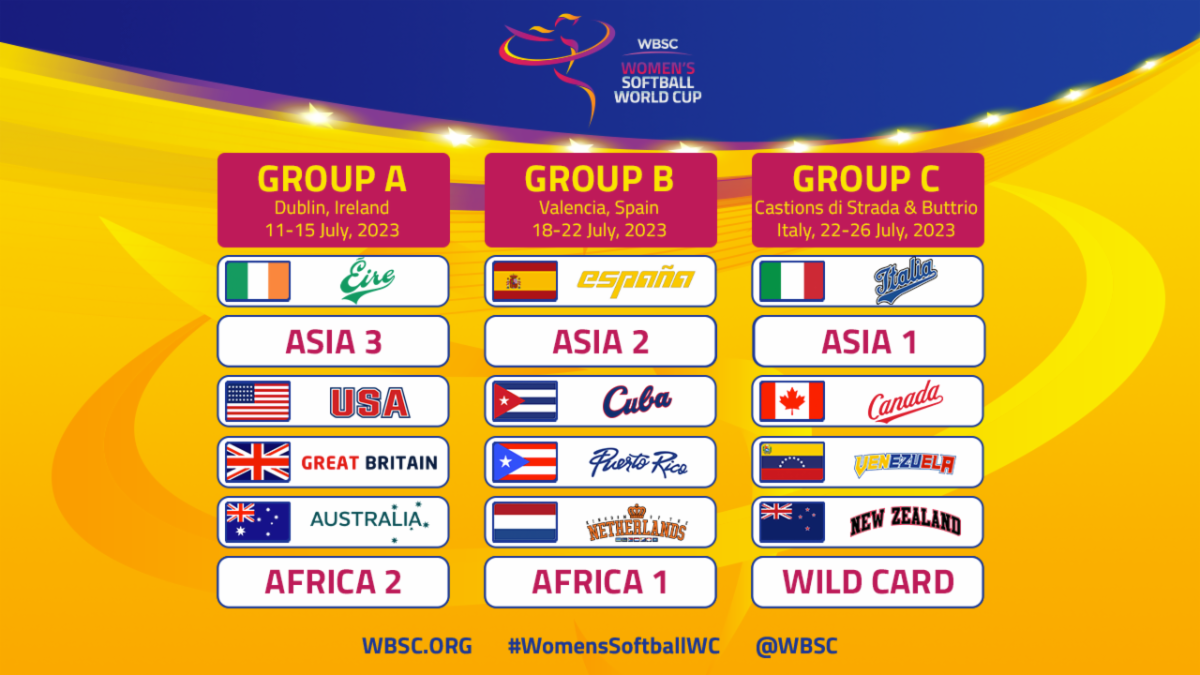 The tournament has 12 of the 18 participating teams confirmed. The Netherlands, Great Britain and Italy advanced as the top-three nations from the European Championship 2022; while USA, Canada, Cuba, Puerto Rico and Venezuela qualified as the top-five from this year’s Pan American Championship. Two wild cards have been allocated to Ireland and Spain as host nations, while Australia and New Zealand will represent Oceania.

Two continental qualifiers are still to be played, with three spots available in the Women’s Softball Asia Cup to be played in Korea next year, and two more in the African Qualifier, slated to be played in Botswana in the early months of 2023. After these two tournaments, the WBSC will award the final wild card to complete the 18 teams of the competition.

The top two teams from each group of the Group Stage, plus two wild cards, will advance to the eight-team World Cup Finals in 2024. The exact dates of the WBSC Women’s Softball World Cup Finals, to be staged in Castions di Strada & Buttrio, Italy, will be announced at a later date. 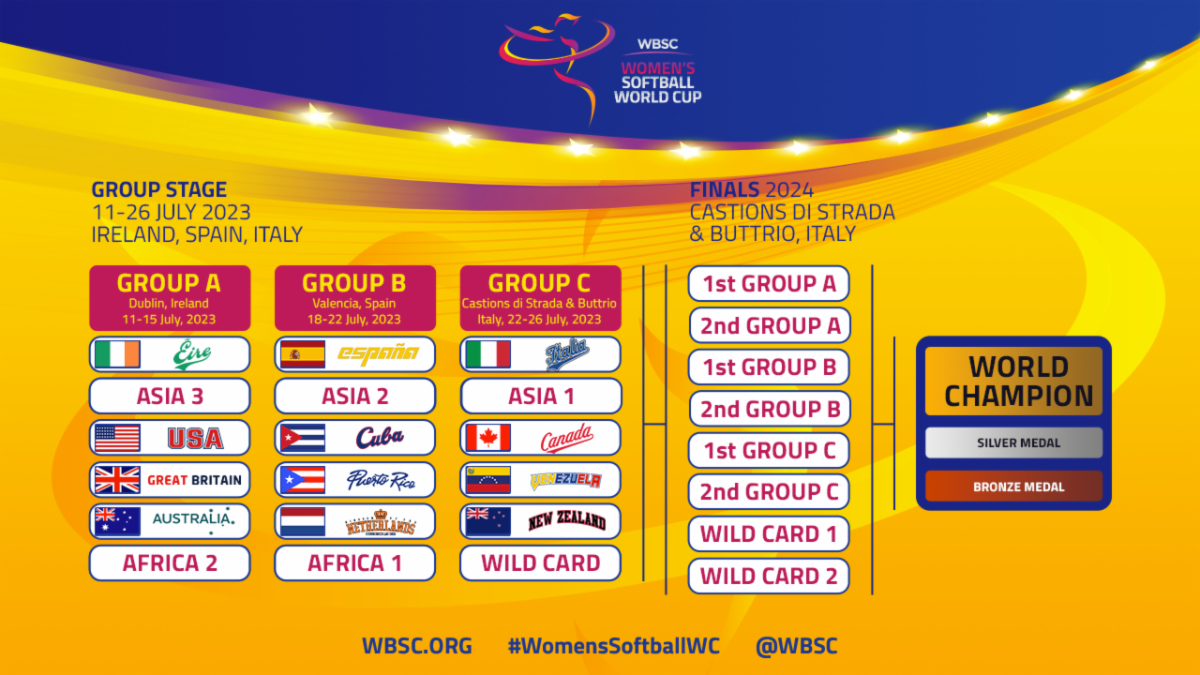 The wild cards designation criteria for the Finals are (in order):

The competition format of the Group Stage and the Finals will also be announced at a later stage.

“The announcement of the composition of our World Cup group is an exciting moment as we build towards the summer of 2023. We are honoured that Ireland will welcome some of the top nations in July 2023 and we look forward to giving each of them a warm Céad Míle Fáilte when they arrive,” said Colum Lavery, President of Softball Ireland. “This tournament presents a once in a lifetime opportunity for our players to play in a World Cup on their home field and for us to create a strong positive legacy for the game in Ireland, promote all disciplines of the game in Ireland and supercharge the growth of women’s and youth softball.”

“It’s a great honour to be part of this historic moment with the first Softball World Cup in a two-stage format taking place in Europe and in my country. Of course, it is also a great responsibility, but it is equally certain that we will be hosted by local authorities which have a great tradition of hosting major events,” said Andrea Marcon, President of the Italy Baseball Softball Federation. “This is why I renew my invitation to fans from all over the world to come to Friuli Venezia Giulia and enjoy sporting excellence and the local culture, scenery and food and wine of Italy that await them with open arms.”

“We are very happy to host the WBSC Women’s Softball World Cup and have no doubt we will help deliver a great tournament, thanks to the Valencian public institutions and Valencia baseball softball federation, which are experienced in hosting large-scale events,” said Jesus Lisarri, President of the Spain Baseball and Softball Federation. “I want to thank the WBSC for trusting our federation to organize this event.”