Softball schedule announced for The World Games 2022 in Birmingham, Alabama

The eight qualified teams have been drawn into two groups. After a three-day group stage, the top two teams in each group will advance to the semifinals, on Tuesday 12 July. The day after will take place the bronze medal game at 4 p.m. local time, and the final at 8 p.m..

The eight qualified teams have been drawn into two groups to start the tournament. After a three-day group stage, the top two teams from each group will advance to the semifinals, which will be held on Tuesday, 12 July. The medal round is set for 13 July, with the bronze medal game scheduled for 4 p.m. local time and the gold medal final at 8 p.m. 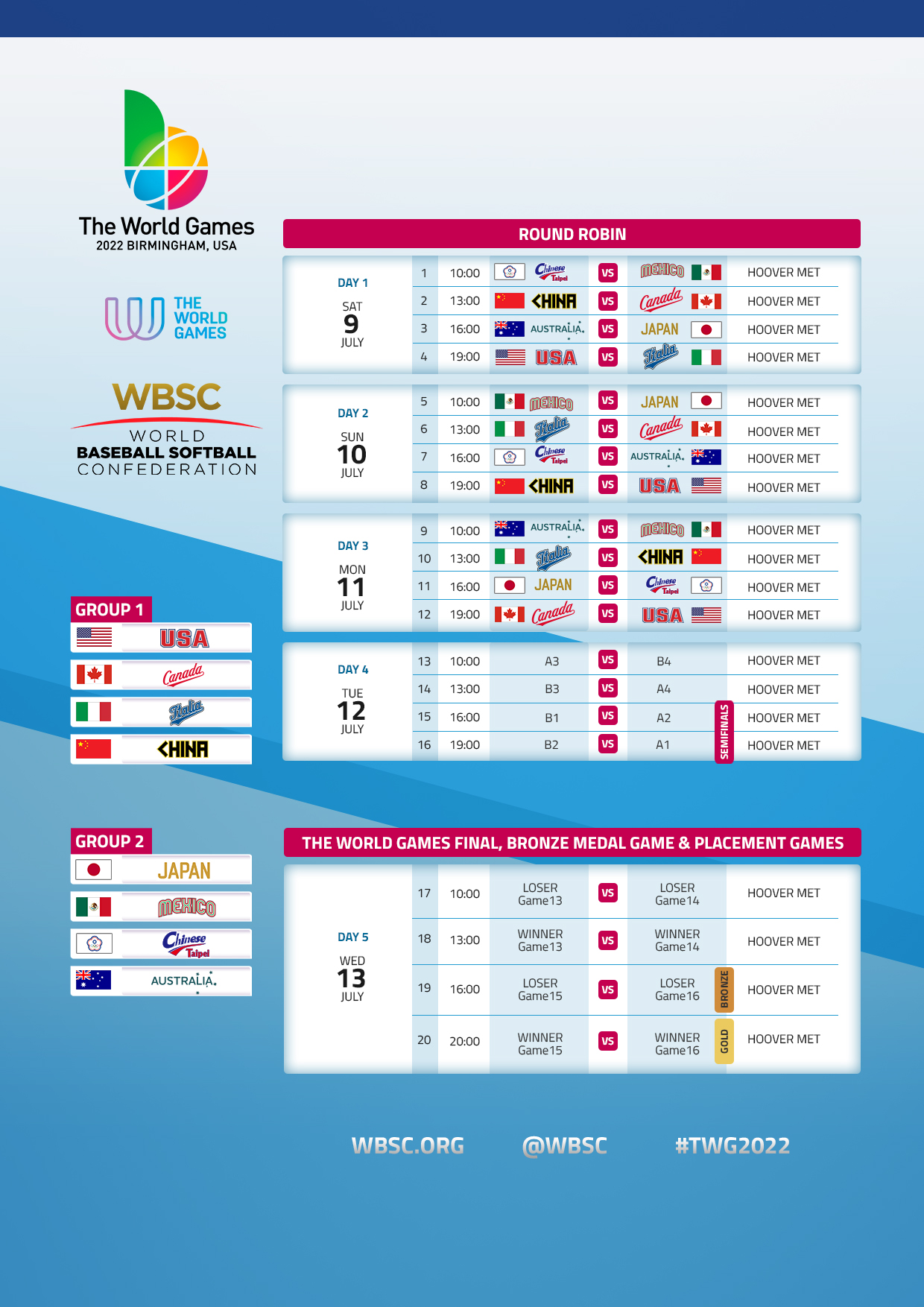 Chinese Taipei and Mexico will open the tournament on 9 July at 10 a.m., followed by China and Canada at noon. Japan, the Tokyo 2020 Olympics gold medal winning team, will take on Australia at 4 p.m. while USA, the host and top-ranked team of the tournament, will face Italy in Game 4, at 7 p.m.

“We are looking forward to seeing all six teams which participated in the Tokyo 2020 Olympic Games in action, as well as China and Chinese Taipei, as a new Olympic cycle begins with Los Angeles 2028 the new target,” said WBSC Secretary General Beng Choo Low. “Fans will be able to watch once again the greatest softball teams and players in the world, in what not only has the prize of a World Games title on the line but also the chance to claim the World Champion mantle, which USA last won at the WBSC Women’s Softball World Championship in 2018.”

“Softball was in the programme of the first edition of The World Games in 1981 in Santa Clara, California. Now the Games return to the USA, and so offers the US team the chance to perform in front of their own audience and to possibly become The World Games champions once again. We are convinced that the competitions at the Hoover Metropolitan Stadium will be a huge hit with fans,” says IWGA CEO Joachim Gossow.

“Softball is definitely one of the most anticipated competitions on our program. The World Games 2022 will be the first major international sporting event on American soil with full venues again, and we’re excited to watch these incredible competitors play and ultimately crown the gold medal winner,” said Nick Sellers, CEO of The World Games 2022.

Tickets for the individual competitions are available at twg2022.com/tickets/.

The Opening Ceremony of The World Games 2022 will be held on 7 July at Protective Stadium.